I've added a new blog to "My blog list" on the left hand side margin of this blog.  I should have done it ages ago as I am a total Trove fan.  I think it is one of the truly great contributions that libraries have made to Australian society - for researchers, historians, people curious about their town, family, personal interest or whatever.

The catalyst for adding a link to the Trove blog is a post by Tim Sherratt called The news in a word. Please click through and read about Tim's philosophy and how it gets played out in this example.  This, along with other work by Tim shows that Trove is more than a great portal - it is a platform to build things on - to steal Tim's comment from the blog & various other talks he has done about Trove.

Make sure you look at the output of this "news in a word" project here.

Tim's post shows just how libraries' digital collections are contributing to the digital humanities & will hopefully inspire others to build other interrogation tools / foci to exploit the riches of the NLA collection.  The question is, how many other libraries are also working towards making their collections as accessible and usable?  Hopefully others are not just watching what the National Library is doing with Trove, but striving to follow its example.

You may choose to follow the Trove Blog, or when you visit this site check out the brief updates under the Trove link & visit whenever you see something of interest.  Either way - I hope like me & if you're not already, that you become a Trove fan & spread the word about how great it is & what its potential is!
Posted by Geoff Strempel at Friday, May 30, 2014 1 comment: Links to this post

Mannum Library has joined it's Mid-Murray Council neighbour Morgan on the One Card Network today.

The libraries have decided on a single shared Enterprise site for all libraries in the Mid-Murray council & their site is here. It features a number of local photos including a great photo montage of the diversity of the council's area, from the cliffs of the Murray River to the green hills of the eastern slopes of the Mt Lofty Ranges.

Mannum has a great collection of digitized original photos of paddle steamers on the Murray River which are currently stored on a local PC.  Over time it would be great to have these on Portfolio for all the world to see.

In coming weeks the other two libraries in the Council (Swan Reach & Cambrai) will also join the consortium.
Posted by Geoff Strempel at Thursday, May 29, 2014 No comments: Links to this post

Back on 25 February I posted some stats about where we are up to regarding the roll out.  I've been asked to provide an update to these figures, so here they are below.

As of today we have transitioned 80 library services from 62 councils onto the One Card system.  These 62 councils account for 98% of the State's population.

In the earlier post I commented on a forthcoming bib-record de-duplication process, anticipating that we would clean up approximately 100,000 records.  At the time or writing this was our advice, however the process was not as comprehensive as we had hoped, leading to the de-duplication of only 24,000 records.  This was a bit disappointing & points to the fact that we will need to undertake a greater rate of direct staff intervention to clean up our database.  The User Group is working towards a plan which will see a concerted effort across the network to speed up the process.

Some members of the project team are on the road this week to conduct face to face meetings with some of the last libraries which will transition to the system in coming months.

In the next few weeks (the rest of May & June) we expect to welcome Mannum, Swan Reach, Cambrai and Eudunda to the network.
Posted by Geoff Strempel at Tuesday, May 20, 2014 No comments: Links to this post

The Renmark library joined the consortium on Monday - 3 days earlier than planned.  This came about because the library had closed to get some other physical changes made, such as new carpet etc.  Therefore they have not had to operate in "offline" mode.  By not having offline files to load etc they were able to move straight to Symphony when they re-opened to the public on Monday.

Getting Renmark online is a real milestone for the project and the Riverland region.  We have finished the rollout to all "Riverland" libraries, so local customers can have a true One Card feel of using their card at any local library.  Also, Renmark was the last of the libraries we designate as a "C" library to come online.  (C libraries are country libraries which are not School Community Libraries.)

The team has been working for a few months with some Lower Murray libraries & we will therefore welcome Mannum & Swan Reach in coming weeks.

The Renmark Enterprise site is here.

Update: Maxine has sent us through some great photos of their renovated library as well as some comments about what they've been up to.  She wrote, "We were extremely excited to 'go live' 3 days early especially since this meant we didn't have any offline days at all! While our data was extracted and loaded we took the opportunity to get stuck into some major renos in the library which included new carpet, repainting and then demolishing the library toilets to rebuild along with the addition of a new storeroom.


We reopened with a whole new look and a new library system. The day was then celebrated with plenty of blue and white balloons and a blue and white lolly buffet to keep members busy while we issued them with new cards.


Our thanks go to our wonderful project team especially Sue who has been amazing and Jo, James, Cathy, Matt, Bob and Brad." 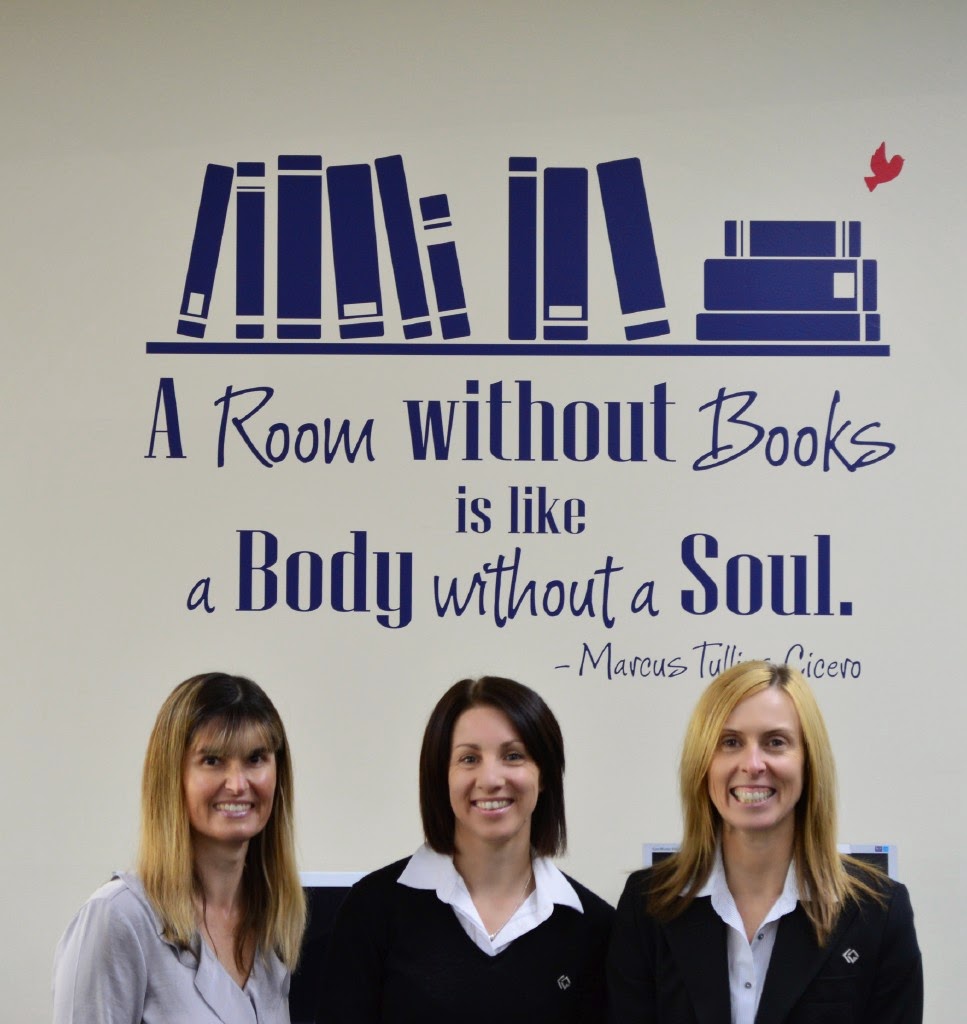 Posted by Geoff Strempel at Tuesday, May 13, 2014 No comments: Links to this post

Kangaroo Island has joined the consortium today - a day early.  We're delighted to have them on board.  And for those of you who are unaware, the library has their main branch at Kingscote, with an annexe at the village of Penneshaw.

Customer Service & Library Officer Tanya Tweden told the local newspaper, "We are excited to be part of the One Card network as it will be of great benefit to our Kangaroo Island community. This project would not have been possible without the support of our dedicated Library and Customer Service team.” And I am sure that this is correct.  My desk is near where PLS project officers Jo Rivers and Sue Isted sit & I have heard the regular project implementation calls between PLS and the KI team.

The Kangaroo Island Enterprise site can be found here.

The library will do their community launch next Tuesday, with a morning tea.

Update: The library tells us that they had a great morning tea with customers and council staff on Tuesday 13th.  They also delivered catalogue demonstrations to the public.   Below are a couple of pictures below - of staff demonstrating the system to customers & celebrating with their banner & balloons. 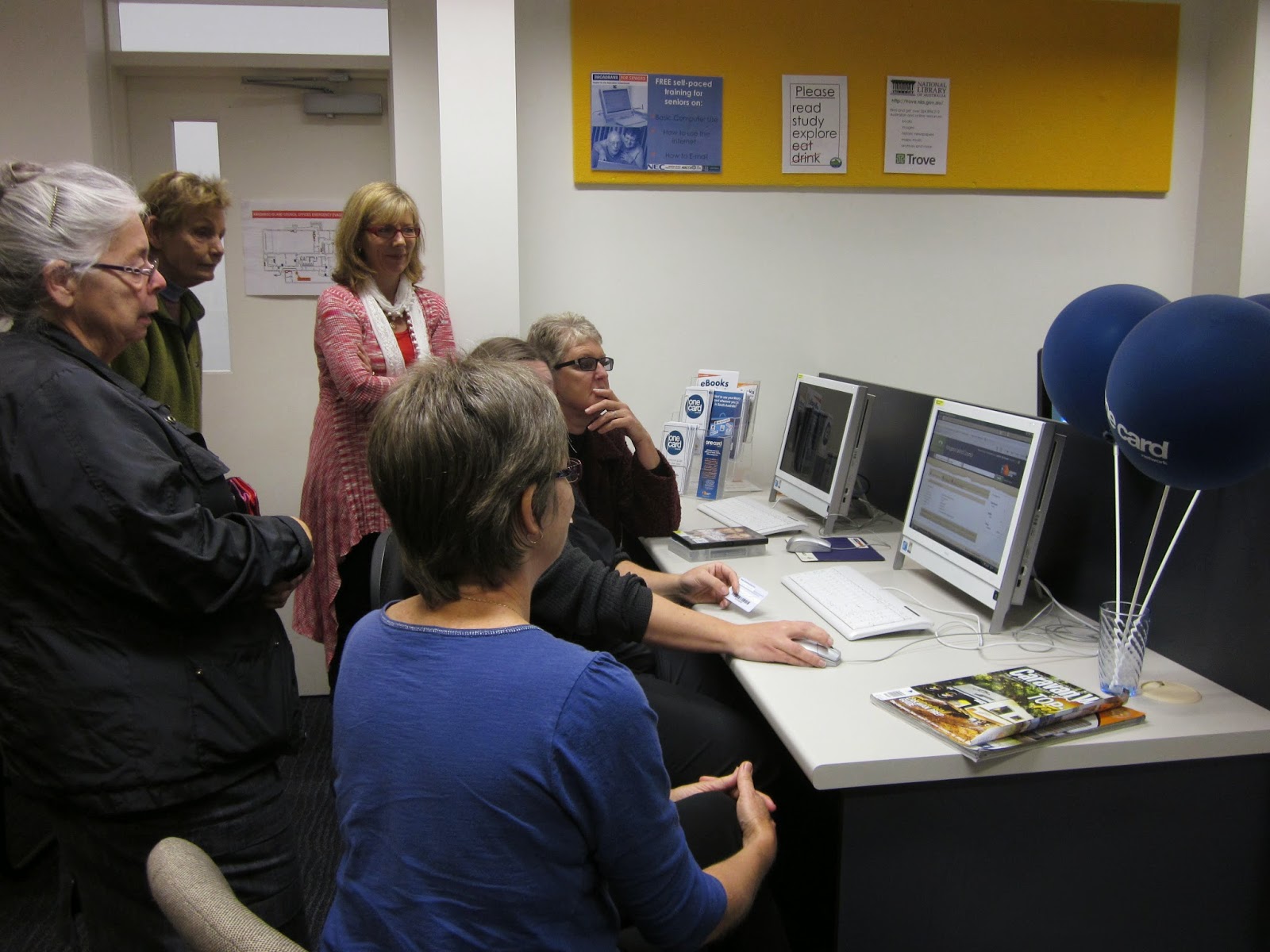 Posted by Geoff Strempel at Wednesday, May 07, 2014 No comments: Links to this post

May has started with a bang - with Victor Harbor going live as the library opened to the public at 9:30 on 1 May. Victor is the first of four additions to the consortium in May, with Kangaroo Island, Renmark and Mannum scheduled to also join up this month.

The launch event included the council's Mayor & CEO along with volunteers, Friends, library staff and various council staff who had been part of or provided support for the project. Lyal, Sue and I - all from PLS were very happy to be part of the launch.

It was a very BLUE event, with a gourmet spread of all things blue, from jelly cakes to lollies, and soft drinks, as you can see from the photos below.

The library's preparation of their public for the changes has been ongoing for months, using a countdown TV screen as well as a static display of what would happen in March, April and May and what impact this would have on library users. And staff's hard work has paid off with an incredibly smooth transition.

Ben Footner (library manager - seen at the front of the team below) noted that the team will be looking forward to future school holidays now that they're on the system.  Apparently over the last year or so very eager customers from One Card libraries who were holidaying in Victor appeared at the desk with a pile of books, expecting to be able to check them out on their "home" library card.  The library then joined up these visitors, but they'll really be looking forward to having a seamless procedure from now on.

You may be aware that SirsiDynix has released a product called eResource Central, which enables e-resources (e-books & digital audio books) to be discoverable in each library's Enterprise site.

When it was 1st released eRC didn't have the connectors for our e-content provider Overdrive fully established.  However over the last 12 months they have progressed their connections with a variety of content providers including Overdrive.  Given this progress PLS has agreed to purchase and install eRC so that the Overdrive content that the consortium currently subscribes to will be made available directly in Enterprise.  This fulfils one of the original intentions of the One Card project - that the discovery layer (Enterprise) would be the single point of access for all library content.

The timing of the deployment of eRC is constrained by the rollout timetable (17 libraries in 5 months).  Therefore we are planning to get eRC up & running soon after our last library joins the consortium in late September.  At this stage we have not done a full project plan to identify all that we need to do & what a realistic deployment date may be. However we are about to get eRC installed on our "test" system, so that we can become familiar with it, and be well placed to install it as soon as we get an opportunity to do so.

At this stage SirsiDynix is working with further expand the range of e-content vendors which are eRC compliant.  Once this happens we will have the opportunity to consider other e-content providers, as we could then integrate all providers' content directly into Enterprise. (Of course there will be the usual procurement processes to go through to get content from others.  I will have more to say about this in a later post.)  However, even before we add additional paid content to the consortium we do have the option of adding free content from places like the Project Gutenberg and the Open Library.

So - how does eRC work?  You can watch the great simple video on eRC below or find it on the Web here.

And there is a longer conversation with the product manager from SirsiDynix in the video below.


There is also some brief information on the vendor website.  The Swift consortium in Victoria has already implemented and blogged about how eRC works for them.

As we get closer to implementing eRC, and once we've learned more about how it works through working with it in our Test system we will provide more information.  Should there be a need for any training or handouts for the public we will deal with this closer to the event.
Posted by Geoff Strempel at Thursday, May 01, 2014 No comments: Links to this post