It seems to be raining stats at present!

Having just spent 3 posts providing comparisons between SA public library stats and the ALIA targets I have just been notified that NSLA has released the 2012/13 national public library statistics.  You can find them here. These statistics are the aggregate of information that libraries provide to their central support agencies across the country.  Obviously they are only as accurate as the information provided by individual libraries.

I have not had the time to drill down into the figures, however at a cursory glance it is interesting to see that total loans continue to decrease - down by 7M from the previous year.  And this is reflected in SA figures, down 10% over a 5 year period.

If anyone wants to make any comments or ask any questions about what you find in the stats I would welcome your contribution.
Posted by Geoff Strempel at Friday, October 17, 2014 No comments: Links to this post

This post concludes the presentation of a comparison of the aggregated SA Public Library Network statistics against a set of ALIA targets.  It is important that the background to these statistics, and cautions to their use which I wrote about in the 1st post are read in the context of this information. 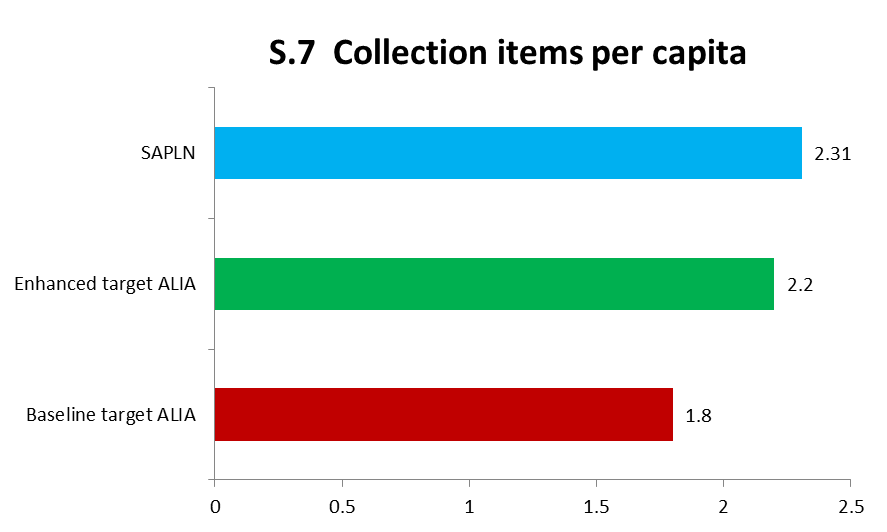 This would tend to indicate that we hand onto our items longer than average, thereby building larger collections.  This is borne out by the graph S.8 below.

This is neither a good or bad thing in itself, as customer satisfaction and collection effectiveness depends more on the quality of the collection than its size. 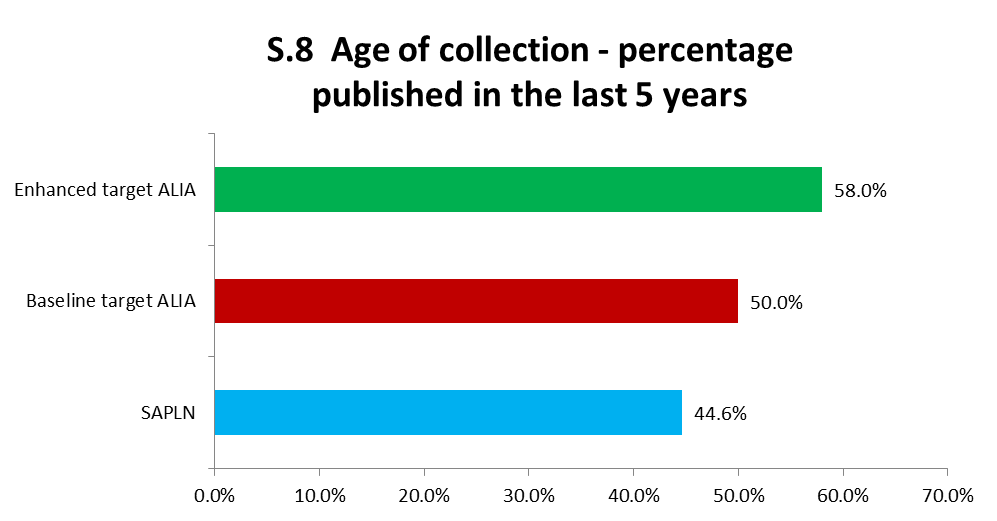 As mentioned above, SAPLN's collections are much older than the ALIA targets.  We could lower the average age of our relatively large collections, by throwing lots of stuff out.  But is this the answer? Perhaps not, because as the graph below (S.9) indicates, SAPLN achieves loans per capita above the baseline target and is almost equal tot he enhanced target.  And when this is compared to other jurisdictions (pages 9 & 10 here) SA has the highest average loans per capital. 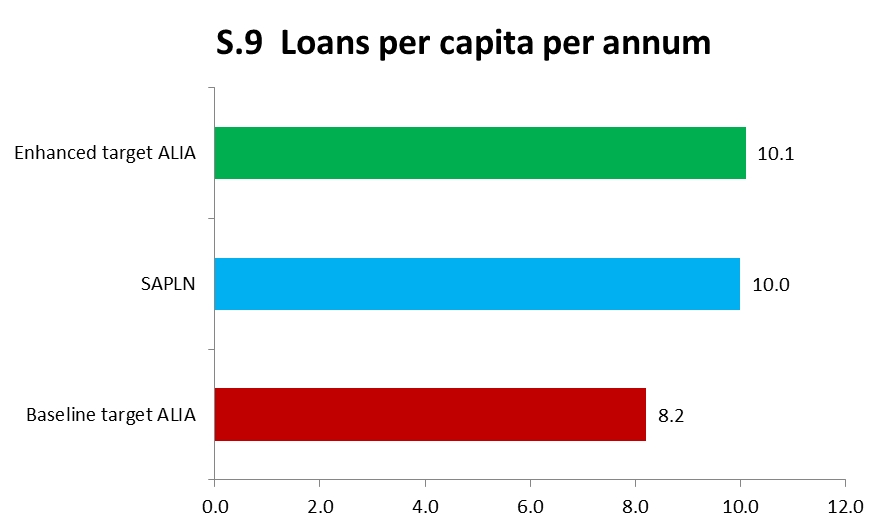 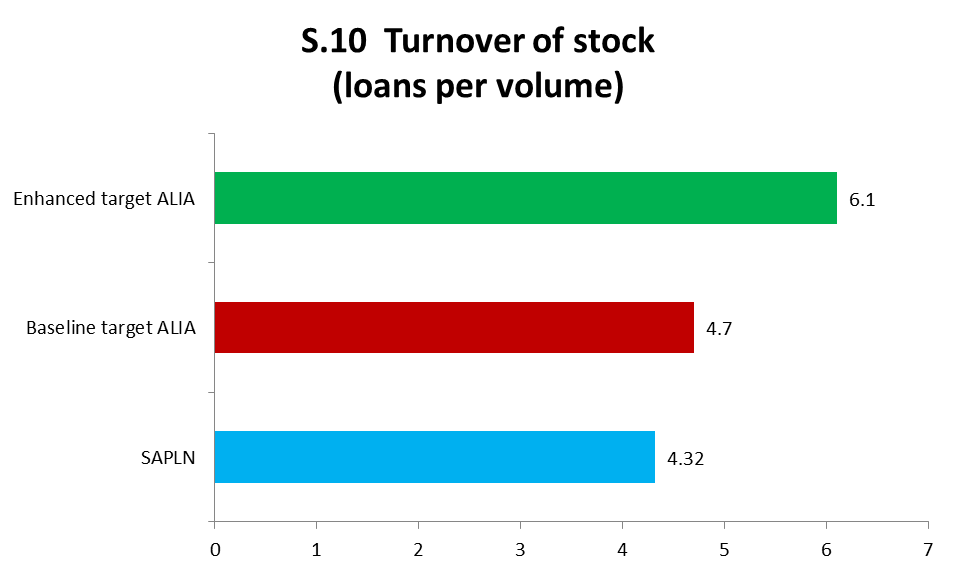 Obviously, where collects are relatively large, even with high loan stats our turnover rates are bound to be low.  this is where the "art" v's the "science" of collection management comes in.  If the turnover rates for adult fiction or DVDs were this low then I would be concerned.  But if libraries are building collections of valuable but rarely borrowed items such as local history collections then having a lower turnover rate is reasonable.

So this figure is a little contentious, as it depends on the collection development policy that a library is using to meet it's customers' needs.  However it is something that we need to look more closely at to determine whether this figure is reasonable & based on deliberate strategy or poor collection management.

The SAPLN figure needs to be used with caution as all of out libraries have Internet access computers even if the smaller ones are serving very small populations.  So this number is skewed.

This post brings to an end the direct reporting of SAPLN statistics compared to the ALIA targets, but it won't be the end of me talking about statistics.  My next post will deal with the statistics which all SA libraries are currently adding to our stats collection software Bibliostat & how I would like to use these in the future.

Posted by Geoff Strempel at Thursday, October 16, 2014 No comments: Links to this post

Following on from my last post regarding the performance of the SA Public Library Network compared to the ALIA targets, I provide the following four graphs with a few interpretative comments.

If you haven't read the 1st post about these figures I recommend that you do go back and look at it, as the context and reliability of these figures are important to note when looking at this information. 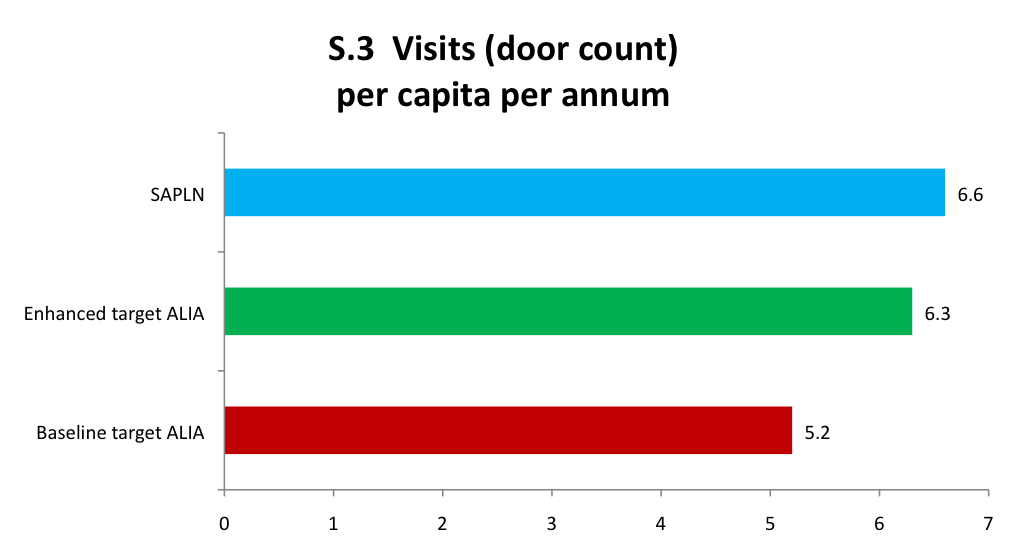 I am aware that some of our libraries don't use automated door counters, but do some sampling during the year to calculate their visits figures.  So this stat needs to be viewed with greater caution than some others.  I should also note that with almost 50 joint use libraries across the State these libraries would also be counting the visits of their students who are using the library for study purposes.  This is likely to have also inflated the SAPLN numbers.

Once again this figure is a little misleading as it is not an average created by dividing the population by the total number of library staff.  It is made up by aggregating up each library's figures.  Where we have 1 staff member in a very small community of 500 people this skews the averages.  So it is best to disaggregate these figures and look at individual library performance. 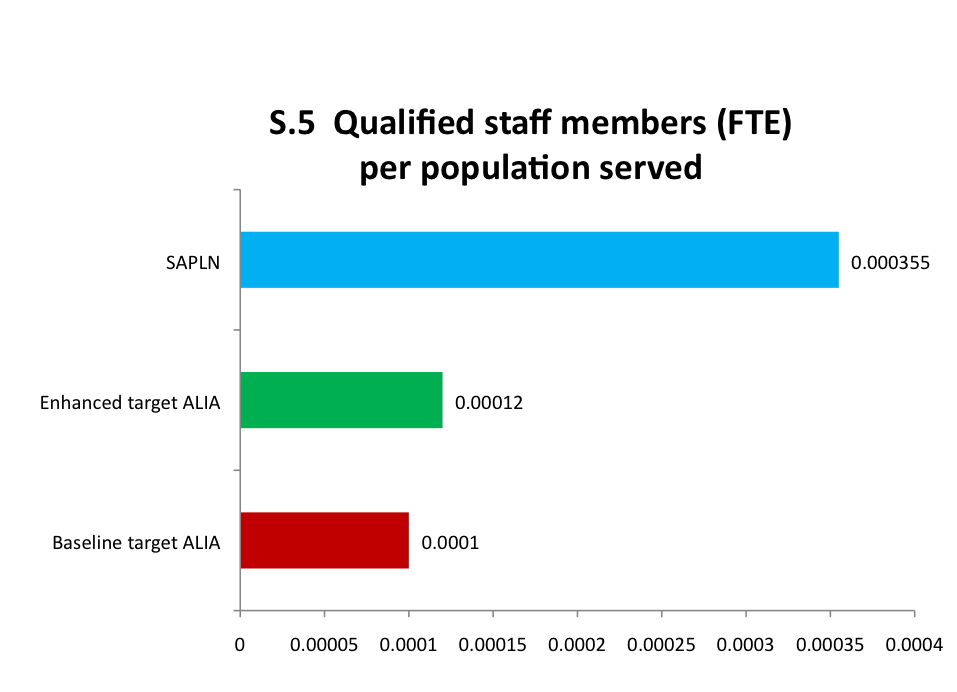 As with the graph above the figures on this one are confusing, so here is the commentary on what it means:  The ALIA baseline target is 1 qualified staff member per 10,000 population, with the enhanced target being 1 per 8,333.  The SAPLN figure is 1 per 2,817.

Again, where we have up to 40 qualified teacher librarians working in a small communities then this unique SA service delivery skews the figures for libraries serving the majority of the State's population.  So local individual library figures are more relevant in this case. 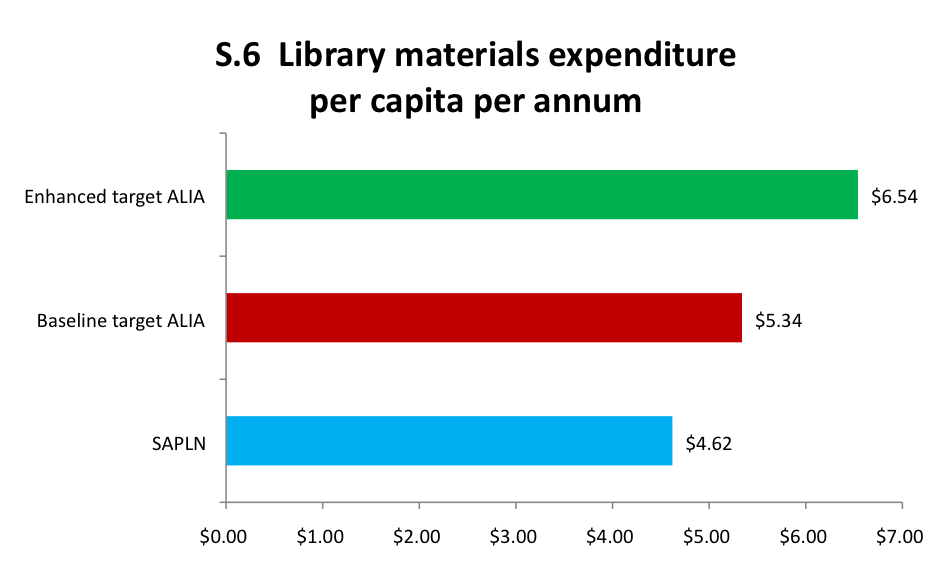 It is interesting to see that this is an area where SAPLN as a whole lags behind even the baseline target.  Other statistics (see pages 15 and 16 of this document) indicates that we're 4th out of the 8 national jurisdictions - so about average for library materials expenditure.  To reach the baseline ALIA standard as a network we would need to increase our expenditure on library materials by approximately $1.2M.

It should be noted that the SAPLN model of purchasing the majority of items through P2 does generate greater universal discounts on purchases. So it could be argued that the money spent in SA is likely to translate into more items purchased than would ordinarily occur.
I should just finish off this post by acknowledging the work done by PLS staff to make this information available.  Several staff have been involved in the collection of all of our statistics over the years.  And the aggregation of these figures and production of these graphs have been the work of Jon Bentick.
Posted by Geoff Strempel at Sunday, October 12, 2014 No comments: Links to this post

Libraries are great collectors of information about various aspects of their work - though most of the measures are more quantitative than qualitative.  That is, we measure lots about how busy we are, but not too much about the impact we are having.  But some quantitative measures can obliquely point towards qualitative outcomes.  For example, if the library starts running a well designed after school homework club, and the attendance of high school students increases by a consistent 30+ people a day then it could be inferred that the program was relevant and successful.  So quantitative numbers can point to a qualitative outcome.

I was fortunate to recently attend the 80th annual IFLA conference in Lyon France where progress on the development of qualitative library performance indicators was discussed.  This session was one of the more popular on the program, proving that there is a real hunger for such information in our profession.  The workshop style for this session was really vigorous with library managers very keen to gather as much information as possible & also volunteer to contribute to further studies.

Interestingly ALIA has released some national public library Standards and Guidelines for Australian Public Libraries. I believe that these standards and guidelines are a good starting point to look at library performance, however they are more focused on library activity than effectiveness.  Having said this, they are a useful starting point to compare the performance of our library network against national benchmarking targets.

PLS has been comparing our overall network performance against the ALIA benchmarks, with interesting results.  I intend to publish overall network performance in the next few posts.  However there are two riders to these results:
Below are the first couple of comparisons between the SA Public Library Network (SAPLN) and the ALIA targets.  I should note that these ALIA targets have both a "baseline" and "enhanced" standard.  This is an attempt to provide more than a single prescriptive measure of success.  It is instructive that the term used is "target" - i.e. something to aim at as a minimum.  It would be fair to say that the Baseline target is just that - i.e. a minimum standard. I would be concerned if libraries or their funders aimed to be at the baseline target for their library performance. 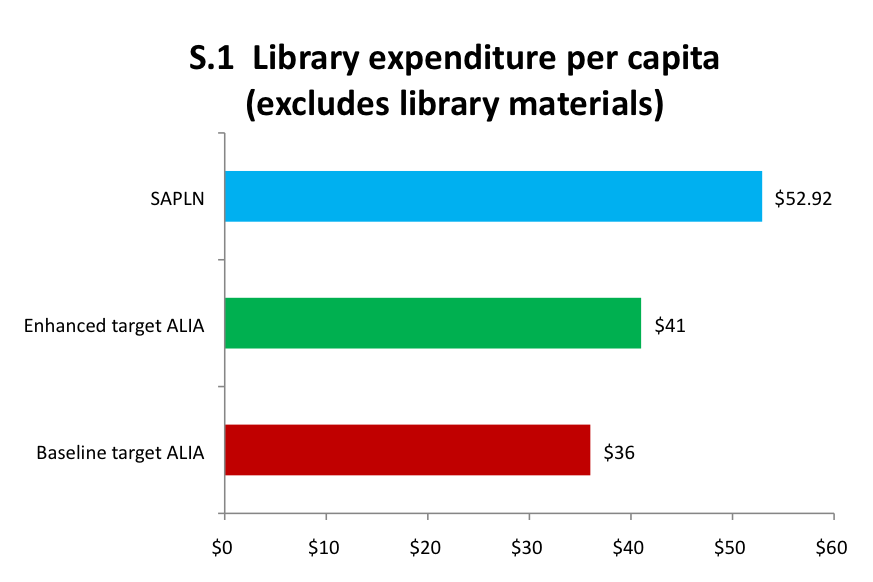 It is fair to say that SA public libraries on average are comparatively well funded.   However, as someone once said to me "comparing yourself to the bottom of the barrel, even if you're above that level is not a good place to be."  I can say that the diversity within the SAPLN is considerable, so this statistic is interesting, but each library needs to look at its own PLS statistical return document on Bibliostat to see where it stands against this measure. 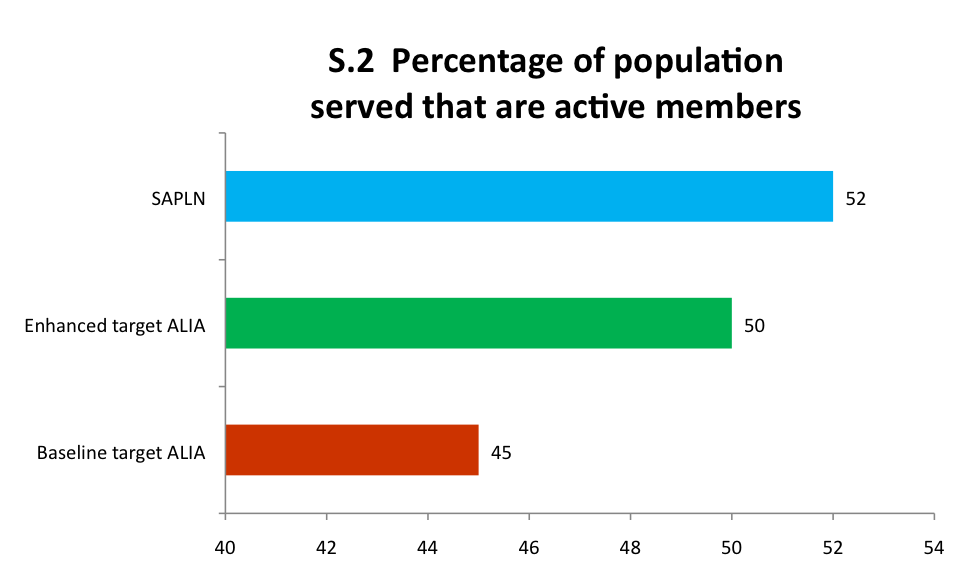 While this graph shows that SAPLN is 2% above the "Enhanced target" it should be noted that the One Card project has provided us with the most accurate information about customers who hold multiple library cards.  There is evidence that some library users have up to 6 active library cards.  The total estimate of duplicate library cards is in the vicinity of 10+% of library users.  So as we move towards a truly One Card outcome it will obviously lead to more accurate information, which is likely to see the SAPLN figures being below the ALIA Baseline target.

There are nine other ALIA targets which I will be reporting on in coming days.  I should note that while these first 2 standards show our network s being above the ALIA Enhanced targets this is not a consistent outcome for all of our libraries.  Also, we are below even the baseline target for some measures I will report on soon.

At the end of reporting these statistics I would like to make a few observations and "educated guesses" as to why our Network's figures are what they are.  I will be interested in comments and observations from members of the network.  As is always true the statistics are interesting, but they only provide us with a starting point to ask a series of questions and to undertake further research.
Posted by Geoff Strempel at Wednesday, October 08, 2014 1 comment: Links to this post

As you may know, the rollout of the One Card Network has prompted quite a number of libraries to develop new library cards.

For some smaller libraries, their new 'One Card compatible' library cards are the first plastic cards the libraries have ever issued to their customers.

We have had requests from libraries to see the variety of cards which have been produced over the last few years. So we made a request to CardSprint (the company responsible for many of the new cards) to put together a compilation of their work for libraries across the State. You can see the compilation of cards here.

When you browse the cards, you'll see some really great designs. Many have utilised photos from their local area, some have chosen to have a variety of cards using a range of photos to represent the diversity of their region & some have created a separate children's card, often with a drawing by a child in the area.

On various cards you'll also see how some libraries have adapted the "Libraries of SA" logo as part of their branding. All up I think you'll agree with me that the creation of some new attractive cards is a great side benefit of the One Card project.
Posted by Geoff Strempel at Wednesday, October 01, 2014 1 comment: Links to this post